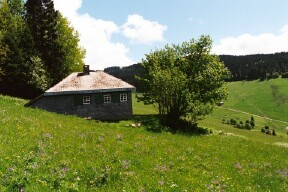 This is a side view looking up the valley. The very
small creek and water is on the other side of the cottage.

In 1922, Martin Heidegger's wife Elfride Heidegger (née Petri) gave Martin Heidegger (1889-1976) a present of a small cottage over looking the small mountain town of Todtnauberg in the Black Forrest. This is about 16 miles from Freiburg, where Heidegger was living. Elfride used an advance of her inheritance to buy a plot of land and pay a local carpenter to build the cottage. Because the depression money was rapidly becoming worthless and she thought it wiser to invest her share in real-estate. The land is small (2-3 acres) and for the farmers it was 'wet' and 'rocky', thus they were interested in selling it. Elfride designed the cottage herself. In August 1922 the family moved in. They had rented their small apartment in Freiburg to Americans. Heidegger worked on most of his writings at this mountain cottage. A large part of his most famous work, Being and Time (1927), was written and finished at a nearby farm house (Johann Brender) where he had rented a room. The two children were too noisy. By some calculations he spent about 10 years out of 50 years at his cottage working on his philosophical writings. The German word "Hütte" means "hut", but in the general context I think it makes sense to call a "cottage" or a "cabin" in the woods. On the one side are the trees and woods, and then on the other side you can see the valleys and ski slopes. There is a very small creek that run along side it and the water contiuously runs into a hollowed out log. There is no running water inside. There are four small rooms.

Elfride did some skiing in the area 1914 when she was a student. She stayed at a similar cottage with her student friends. After her marriage (1917) to Martin Heidegger she decided to have the cottage built as a place where her husband could work in all quietness.

There is not a driveway to Die Hütte. Heidegger would often walk all the way there or sometime take a bicycle, there was also a train up to Todtnau. When Heidegger rejected his appointment to the University of Berlin for the second time in 1933, the University of Freiburg offered to pay for putting in electricity, which was buried in the ground and came up from below. But there is no outside lights.

At the beginning of Being and Time, it says:

Some of the photos on this web page are large at 750 Kbytes and make awhile to download
depending on your connection to the Internet. Try clicking on the box [small photo] if you
want smaller versions of the same photos.

Please note:
This is private property, it belongs to Martin Heidegger's family,
so visitors must respect their privacy.